Specifics of the Problem

History of the Issue

The problem of kelp forest decline was first noticed in the early 20th century when otter hunting along the western coast of North America was very common and unrestricted. With the loss of otters for their pelts, people began to notice that the California kelp forests were also beginning to decline, and the entire ecosystem that the kelps supported were suffering in turn. Although hunting by humans was significantly reduced over the course of the century, sea otters began to face a new threat in the 1990s when killer whales turned their attention to the otters and began to feed on them more than ever before.

Efforts have been made to support increases in the California sea otter populations and reduce sea urchin populations, which in turn helps kelp forest health return to previous levels. Some methods of these efforts are detailed in the Solutions, and indicate that the situation has been improving.

Sea urchins pose a great threat to kelp forests in large numbers. The main predator of sea urchins is the sea otter. In the early 20th century, sea otters were greatly threatened by human hunting along the North American west coast. Humans wanted the otters for their pelts, but an increase in awareness of sea otter decline led to a great reduction in overhunting over the decades due to the International Fur Seal Treaty.

However, sea otters became the focus of another deadly predator in the 1990s. Pacific killer whales were not finding enough sea lions to support themselves, and began to turn to otters as a main source of prey. The first recorded attack on a sea otter by a killer whale was in 1991, after sea lion populations had reached minimum levels along the California coast in the 1980s. The sea lion population decline was due to a decrease in the abundance of their own prey. Killer whales require the energy contained in as many as 1,825 otters a year, so only a few killer whales can do a lot of damage to the sea otter population. 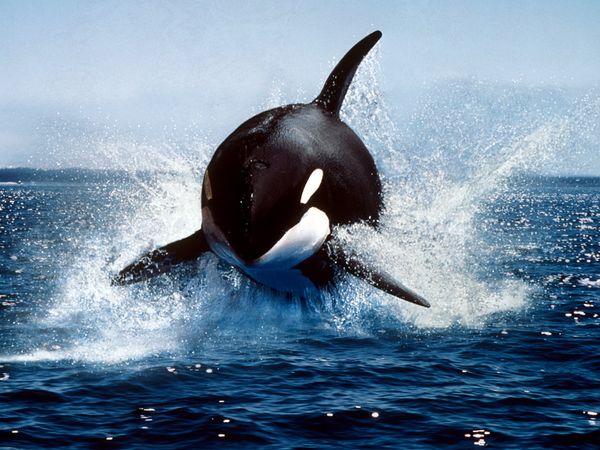 Otters as a Keystone Predator

The loss of otters set into motion a trophic cascade -- when the loss of a top predator has a disproportionately large effect relative to their numbers on lower trophic levels.

With the decline of sea otters, sea urchin populations soared. Usually kept in check by otter predation, the sea urchins were now free to travel in huge masses and decimate kelp forests. Rather than hide from otters in rock crevices and only feast on scraps, they would attack the holdfast of the kelps, graze it away from the substrate, and the kelp would be left to float away and die.

With their numbers left unchecked, sea urchins can travel in herds large enough to destroy kelp forests at a rate of 30 feet per month. An area where the urchins have wiped out the kelps is called an urchin barren, and can be difficult to restore if the urchins remain at their high population levels.

Many species suffer with the loss of California kelp forests. They are an important home for many organisms at different stages of their life. Herring and Atka mackerel spawn in them, and salmon fry use kelp forests as their nursery. Sea birds find food and a resting place amongst the kelp fronds. For California sea lions, harbor seals, and whales, the kelp forests are not only an important site to find food, but a place of shelter during rough storms and waves, as well as from predators.

Ecosystem Services and Impact on Humans

The California kelp forests' massive size allows them to provide a huge buffer for the coastline from big storms and wave action. Not only do they prevent a lot of erosion to the natural coastline, they save people considerable amounts of money by protecting homes and other coastal developments as well.

Because of their huge degree of productivity and photosynthesis, kelp forests are huge carbon sinks which take in the greenhouse CO2 from the atmosphere. When enough otters are around to keep urchin populations under control, kelp forests can take in as much as 12 times the amount of CO2 they are able to when under pressure by urchins.

Kelp forests are important to humans in recreational ways as well. Tourism and activities such as scuba diving and kayaking to observe the diverse marine habitat will be affected by a loss in the biodiversity kelp forests create.
Posted by Unknown